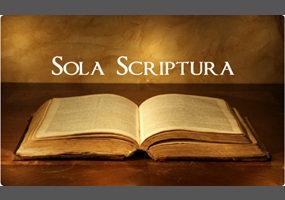 The Authority of Scripture

Every once in a while I come across a book or article that provides substantial clarification regarding those things that divide us.  One of these is an article published in Theology Matters by Robert P. Mills titled “The Priority of Authority: Holy Scripture and Human Sexuality.”  Rev. Mills openes his article by paraphrasing a common claim made by Progressive Christians that:

“We all agree on the authority of Scripture. We just disagree about interpretation.”

Rev. Mills develops his argument in three areas, those being:

Part 1, Authority and Humanity, will discuss the nature of authority, contexts in which authority is exercised, the human need for authority both individually and collectively, and the decline of authority in Western culture.

Part 3, Authority and Interpretation, will explain why and how evangelical Christians can and must uphold the historic Christian understanding of the nature and function of authority in general and the authority of Scripture in particular. It will conclude with a constructive proposal for reuniting the authority of Scripture with the interpretation of Scripture, with specific reference to current conversations in mainline Protestant denominations concerning human sexuality.

It should go without saying that “you should read the whole thing.”  However, if this isn’t possible here are the key clarifying passages.

With regard to “Part 1: Authority and Humanity,” this quote well summarizes our contemporary situation.

The prevailing understanding of many in the mainline seems to be that the individual is the ultimate authority in any and all matters of faith and practice, whether the issue is the interpretation of Scripture or the ordination of church leaders. This is the flight Jeffrey Stout describes as being from authority to autonomy.

Yes, this is precisely the claim of ultimate personal autonomy that underlies Progressive Christian arguments.

With regard to “Part 2: Authority and Scripture,”  the following excerpt is of critical importance.

Anyone who has been even tangentially involved in discussions of Scripture with liberals recognizes that there are those in our congregations and denominations who refuse to recognize the authority of Scripture precisely because they refuse to recognize God as its author. There are those in positions of leadership in our congregations, governing bodies, denominations, and seminaries who quite casually declare that the Bible is entirely of human origin; that the Bible is a record of human efforts to reach out and touch “the divine” and that the Bible may not, indeed must not, be considered God’s revelation of himself to his human creation.

Calvin reminds us that Scripture is our authority for Christian faith and life because God is the ultimate author of Scripture. Scripture derives its authority from its author—God.

This is to where the Confession of 1967 pointed.  And we have arrived at the intended destination where each individual human is the authoritative interpreter of Scripture:

Deconstructionists dogmatically declare that any written work—whether a student essay, the U.S. Constitution, or the Bible—means only what the reader, never what the writer, thinks it means. As a result, any written work may have as many meanings as it has readers, even if the meanings are contradictory. Similarly, a single reader may assign a different meaning to a text every time he reads it.

With regard to “Part 3: Authority and Interpretation,” the Rev. Mills connects the crisis of Scriptural interpretation to the Progressive demand for ultimate personal autonomy.

By rigidly separating interpretation from revelation, liberalism attempts to relocate authority from God as the author of Scripture to each individual who reads Scripture. Uncritically accepting the deconstructionist dogma that there is no such thing as “authorial intent,” that it is impossible to convey an intended meaning to a reader, liberalism insists that there is no authority higher than the individual, which is, of course, the definition of autonomy.

Near the article’s end the Rev. Mills states the ultimate point of conflict that divides the Progressive (liberal) and orthodox camps.

Liberals cannot accept the authority of Scripture because it would supersede their authority to impose their views … To put it bluntly, if God is the ultimate authority, liberals are not. And for liberals openly to acknowledge that reality would be to acknowledge that the beliefs and practices they propose constitute a counterfeit Christianity.

Can there be any greater proof of interpretation of Scripture from the position of ultimate human autonomy than the recent PCUSA debate on the definition of Christian Marriage?  In the 24,000+ words written in Rationales supporting same-gender marriage I find only three direct references to Scripture (i.e., text with chapter and verse) and Jesus Christ is not quoted even once. If actual Scripture is so utterly ignored then what is the nature of Rationale text in which Scripture is discussed? It is the authors telling us what they believe Scripture teaches, often in the most general and/or selective terms, without the slightest attempt at demonstration.  So completely have they internalized the idea of interpretation from human autonomy that they don’t even pretend that Scripture has authority over their opinions or beliefs.

The issue that now confronts us is fundamental to our identity as Christians saved and beloved by a sovereign Triune God — Father, Son and Holy Spirit.  To reject this God as Scripture’s Author and thus to remove Scripture’s authority from this God will lead only to despair and destruction.  If we fail to stand on this ground there will be no end to the apostasy we will be demanded to embrace, and to which we will eventually succumb.