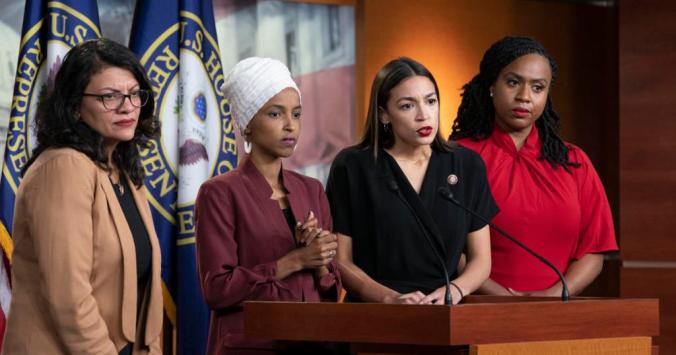 A Cowardly and Dishonest Epithet

There’s no point in mincing words.  The Squad has made it absolutely clear that while they are free to hurl hatred for the United States, Israel, Jews, their very own Speaker, President Trump and anyone else they deem fit; anyone who dares to oppose or even criticize them is designated to be a racist. Some of you may be doubtful.  So, here are the words of Rep. Rashida Tlaib in The Squad’s interview with “CBS This Morning” co-host Gayle King.  Note that this statement is with regard to Nancy Pelosi, the Speaker of the House from their own party.

She is Speaker of the House. She can ask for a meeting to sit down with us for clarification. The fact of the knowledge is and I’ve done racial justice work in our country for a long time. Acknowledge the fact that we are women of color, so when you do single us out, be aware of that and what you’re doing especially because some of us are getting death threats, because some of us are being singled out in many ways because of our backgrounds, because of our experiences and so forth.

Rep. Tlaib is clearly saying that even Speaker Nancy Pelosi shouldn’t single them out for criticism because of their race, gender and backgrounds.  And, they are doing so by claiming special protection due to the implicit victimhood associated with these characteristics.

The one specific claim is that some of them have received death threats.  We can all agree that no-one should be receiving death threats.  I can only imagine the upset and fear that reception of such a communication would cause.  However, is it credible that The Squad, because of their race, gender and backgrounds are uniquely threatened?  Do they have the most credible reasons to fear actual physical violence against themselves?  These questions will be explored in the following post.

For now let it be said that these four freshmen Congresswomen claim immunity from any criticism from anyone because of their race.  Thus, anyone who dares to criticize them is by definition acting out of racism to some significant degree; even Nancy Pelosi, Democrat Speaker of the House of Representatives!

Do you imagine that this derangement is limited only to The Squad?  Absolutely not so.  Here’s what powerful Progressive media figures have been saying about Speaker Pelosi.

The Squad has plenty of friends in high places. One such is Karen Attiah, global opinions editor of The Washington Post. On July 14, taking note of Trump’s most recent anti-Squad animadversion—the instantly notorious “go back” tweet—Attiah volleyed her own strong tweeting: “Make no mistake: Nancy Pelosi’s dogwhistling snipes at @AOC, Ilhan Omar, @RashidaTlaib and @RepPressley helped pave the way for this vicious, racist attack from the president.”

Today, through this infidels versus heretics prism, we can see plenty more evidence underscoring Woke anti-Pelosi ferocity. On July 22, left-wing YouTuber Cenk Uygur went even further, declaring in The Wall Street Journal, “Democrats Should Unify Behind AOC, Not Pelosi.” In Uygur’s opinion, “Democratic voters were clear in 2018 that they want Mr. Trump impeached.” And yet, he continued, “There is not a single public official doing more to protect Mr. Trump than she is.” That pro-Trump “she,” of course, is Nancy Pelosi.

But it’s even worse than this.  For the Squad doesn’t apply this immunity from criticism to all people who can claim victimhood under their Intersectional ideology.  In fact, if you are brown, black, Muslim or gay and don’t toe their Progressive line you are persona non grata.  Here are the words of Rep. Ayanna Presley at the Netroots Nation conference explicitly making this point.

For example, the Congressional Black Caucus (CBC), who despite their black and brown skin decided to vote en masse with the racist Democrat House Speaker rather then with the true “brown, black and Muslim” Squad.  The BCB must be racist (or maybe just traitors to their race)!

Do you see?  The Squad has no respect for any person, be they brown, black, Muslim, queer (or a white woman) who doesn’t think exactly like them.  If you are a member of these groups and stray out of the the Progressive camp then you are fair game.  And, if you are outside of these groups then any criticism is racism.

This is not courage or honesty.  No, it is the exact opposite.