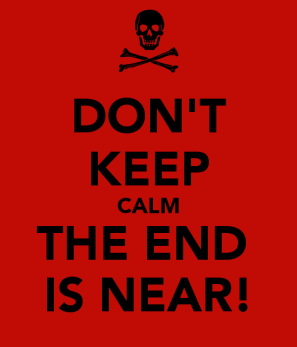 Do you really want to bet your future on the “Democratic Socialists” who, as Senator Mike Lee said, “want Americans to trust them to reorganize our entire society and economy … when they couldn’t even figure out how to send out the right press release.”

Representative Ocasio-Cortez tells us that “the world is gonna end in 12 years” because of climate change:

“Millennials and people, you know, Gen Z and all these folks that will come after us, are looking up, and we’re like: ‘The world is gonna end in 12 years if we don’t address climate change, and your biggest issue is how are we gonna pay for it?”

And, aside from turning the United States of America into the Union of Socialist States of America, it has been credibly estimated that the Green New Deal (GND) will cost at least 93 trillion dollars over ten years.  That’s one-half of the United States’ 2017 Gross Domestic Product (GDP) every year for ten years!  In other words add the current $4.7 trillion annual Federal spending (this excludes state and local government spending) to the $9.3 trillion GND to get an annual Federal budget of 14 trillion dollars, or 70% of our annual GDP.

Now, for all you Progressives who would rather  be “morally” correct than “factually” correct, please consider that GDP is not just all the personal income generated by the U.S. economy in a year.  Rather it is:

… the monies spent by the different groups that participate in the economy. For instance, consumers spend money to buy various goods and services, and businesses spend money as they invest in their business activities, by buying machinery, for instance. Governments also spend money. All these activities contribute to the GDP of a country. 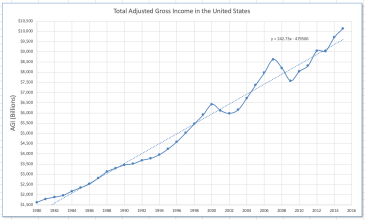 Total Adjusted Gross Income (AGI) data for 1980 – 2015 from the IRS. For you Progressives and Democratic Socialists (but I repeat myself) this is the basis for a “factual” argument.  But don’t worry, your “moral” correctness will magically create the wealth to pull this off!

In 2015 the Internal Revenue Service (IRS) estimated that the total reported personal Adjusted Gross Income (AGI) in the United States was $10.1 trillion.  Thus, were the Green New Deal and current federal government commitments funded by the income tax then every single cent of all AGI (i.e., from every taxpayer in the U.S., not just the top 1%) would have to be taken.  The only additional source for the over $4 trillion annual revenue shortfall  would be to seize vast sectors of the U.S. economy, which would amount to Communist-style collectivization.

But don’t worry “Gen Z and all these folks that will come after us,” nothing consequential to your personal freedom or standard of living will change.  Just look to the case of Venezuela to see a recent example of how well this will all work out (i.e., total civilizational collapse).

And so, given the imminent end, surely our woke Democratic Party will spring into action to save the world “for the children!” Well, not exactly.

The Gen Z group at least has the credible excuse of having been educated by a cadre of credentialed ideological know-nothings.  What’s the excuse for these much older Democratic Presidential candidates?  Oh yea, it’s that total Socialist power thing.