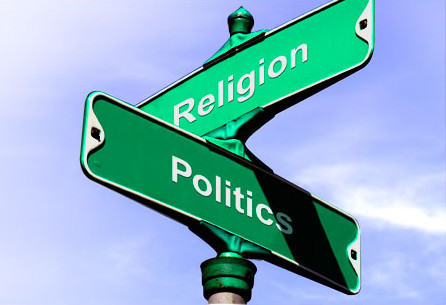 Religion and politics can’t help but mix.  In fact, it is inconceivable that the committed follower of a bona fide religion would be able to completely isolate their faith beliefs from their political beliefs.  So, I will not be arguing for a separation of religion and politics.  However, this doesn’t mean that the mixing of these domains is without challenge and outright danger.

In what follows I will focus on this issue at the scope of my actual experience, that being a mainline Protestant Christian.  Even here the scope will often narrow to my specific denominational experience, that being a member of the Presbyterian Church U.S.A. (PCUSA, 1983 to present) and one of its predecessors, the United Presbyterian Church in the United States of America (UPCUSA, 1958 to 1983).

As the title of this series clearly implies, my experience of Christianity and politics has led me to an uncomfortable place.  For, although I fully support our Christian faith as the authoritative wellspring of political thought, I also find that this relationship has been undermined and, more recently, utterly reversed.  This excerpt from An Anxious Age: The Post-Protestant Ethic and the Spirit of America by Joseph Bottum provides a concise summary of the modern beginning of this religious/political ideology.

Formed in the victory of civil rights activism, a new version of the social gospel movement became the default theology of church bureaucrats in the Mainline.  The churches “increasingly turned their attention to the drafting of social statements on a variety of contemporary problems,” as the religious historian Peter J. Thuesen has noted, and their statements “revealed a shared opinion among Mainline executives that the churches’ primary public role was social advocacy.”

Note well — not the Gospel of Jesus Christ, but “social advocacy” of a particular secular stripe.

When the then General Assembly Moderator, Heath Rada, addressed the April 18, 2015 Presbytery of Chicago Assembly meeting he had precious little to say about the Gospel of Jesus Christ.  However, he had a lot to say about the effectiveness of the PCUSA’s social advocacy.  In fact, I’d say that the central theme of his “pep talk” was something to the effect of ‘Rejoice sisters and brothers!  The PCUSA is a highly regarded little cog in the Progressive political machine!’

Most recently (July 28, 2017), the Wall Street Journal published an article by Libby Sternberg titled “Why Not a Day of Rest From Politics?”  She wrote from the perspective of a member of the Episcopal Church, another mainline Christian denomination.  The first paragraph describes the deep roots of faith and fellowship that she experiences at her local church.  But the second paragraph well states the issue that many non-Progressive Democrat members of mainline denominations are now facing at an unprecedented level.

Yet I do all this knowing that my church is effectively a political adversary.  I am a Republican.  The Episcopal Church, like many mainline Protestant denominations, supports a “social justice” agenda that reads as if it were pulled straight from the Democratic National Committee Platform.

The same thing can be rightly said about the PCUSA’s focus and supported political positions.  And, due to the exodus of hundreds of thousands of members since the PCUSA’s decisions to allow ordination of practicing homosexuals and same-gender marriage, the aggressiveness and pervasiveness of this ideology is clearly on the rise.

I have covered this rise throughout this blog’s existence.  I’ll try to link back to relevant posts as I discuss this sorry state of affairs at greater focus and detail.