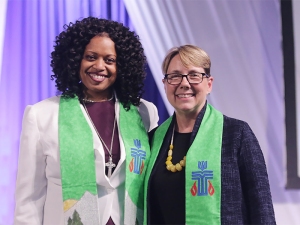 The Presbyterian Church (USA) elected Jan Edmiston, right, and Denise Anderson as the Co-Moderators of their 222nd General Assembly. Photo by Danny Bolin, courtesy of PC(USA)

The GA elected the Rev. Denise Anderson as a co-moderator at its 222nd General Assembly, who wrote this in her blog on June 12 concerning the Orlando massacre by an Islamic terrorist (emphasis added):

This particular gunman took out fifty people in one night. How many LGBT sisters and brothers have we — the Church — gradually and systemically killed over a longer period of time? He and we have been in the same business. We’re simply not as efficient as he was.

And lest there be any doubt whom is included in this appalling diatribe (emphasis again added).

Sadly, many in our own ranks aren’t too idealistically different from this gunman. And, though he may have been a “lone wolf,” this kind of hate does not develop in a vacuum. It is nurtured. It is facilitated. It is given permission to thrive and grow. It is provided with a safe space. Church, for whom/what will we provide sanctuary? I believe God is calling us to make that decision today.

Much more could be said about the theology / ideology / mindset that is here on display.  For now, it is sufficient to convey that this person who accuses Christians of being “inefficient” mass murderers was overwhelmingly elected by our GA into the highest position in the PCUSA.

The other co-moderator is the Chicago Presbytery’s own Rev. Jan Edmonton, who’s Presbytery concurred with the Overture “On the Admission of, and Apology for, Harms Done to the LGBTQ/Q Members of the PC(USA), Family and Friends—From the Presbytery of New York City”.

This Overture demanded an apology by PCUSA Christians who object to same-gender marriage and/or gay ordination just a few years after the GA had promised respect for opposing views.  It was too extreme for even for the GA’s Advisory Committee on Social Witness Policy (ACSWP), who proposed a softened version (although other GA committees strongly supported the Presbytery of New York City Overture, emphasis added).

At the same time, despite rapid recent gains in social acceptance for marriage equality in U.S. society at large, the Presbyterian Church (U.S.A.) has pledged to remain a place where conscientious individual views on both ordination and marriage will continue to be respected. In the larger world, we are well aware that Christians hold a range of views about sexuality, celibacy, reproductive rights, freedom of religious expression, and human rights generally.

But lest you place your hope for honorable treatment in the ACSWP, note hat they are simply asking for a “decent interval” between the making and breaking of the PCUSA’s promise.  Note that “11-05” refers to the original Overture (emphasis added).

The proponents of Item 11-05 are deeply right to lift up the forty-year journey taken by our church on matters of sexual orientation. While the Advisory Committee on Social Witness Policy believes it is not time for an apology such as the one proposed…

In fact, the ACSWP doesn’t even fundamentally disagree with the Rev. Denise Anderson’s views.

We are part of a society in which discrimination and even violence toward LGBTQ persons still occur and with which our faith community is sometimes complicit.

We have been pretending for far too long that our local church’s Christian witness can be conducted independently from the PCUSA at the Presbytery, Synod and GA levels.  The election of these individuals as co-moderators makes it absolutely clear what direction the denominational elites plan to take us.  That is, the strategic and daily decisions that set the direction for our denomination will be made by two individuals who have openly stated their disgust for and contempt of non-progressive (or even not sufficiently progressive) Christians.

Will a person who claims no difference between Christians who oppose same-gender marriage and Islamic mass murderers work to heal the wounds of a divided denomination?  Will a person who has attempted to force remaining Bible trusting PCUSA members into apologizing for their position respect their consciences?  The questions answer themselves.

I’m sorry to say that there’s more to report, but I’ll give you time to deal with this installment.